This year, the 4Com Foundation are once again helping a number of different charities across the Bournemouth and Poole region to make a difference at Christmastime. Following on from our successful “12 Days of Christmas” campaign in 2015 and subsequent charitable activities last year, the Foundation have once again partnered with Mosaic, Variety, The Trussell Trust, The Salvation Army, Beaucroft School, Christchurch Angels, Bournemouth Foodbank and Amelia’s Rainbow to help those in need. On Monday the 11th the Foundation were on hand again for another Christmas Party, this time for Variety, The Children’s Charity. 4Com’s Lucy and Charlotte were there to help with the running of the event, getting involved in games and supporting the team wherever they needed it. Lucy commented, “It’s a great event to help out with, everyone at Variety does such a fantastic job, we’re just pleased to be able to help them deliver a fun Christmas party”.

The final of the three Christmas parties we supported this year was held at Beaucroft School on the 12th December. Beaucroft caters for children and young people between the ages of 4 and 19 who are experiencing learning difficulties and those on the Autistic Spectrum. 4Com’s Charlotte Downing led the event and arranged for a visit from Santa, Mrs Clause and a few elves. Other volunteers included Jimmy, Steph, Francesca, Amelia, Abigail and James, who all helped to run the party for 40 students including games of “Santa Says”, musical statues and plenty of dancing.

That same week a team of 4Com volunteers were busy packing 200 food parcels which were shared between Christchurch Angels, The Trussell Trust and Bournemouth Foodbank. 4Com’s Chris Duley spearheaded the operation. He explained “it’s a great effort from everyone here; people used their lunch-breaks, stayed late and helped supply the food which has led to us donating a record number of food parcels this year.” 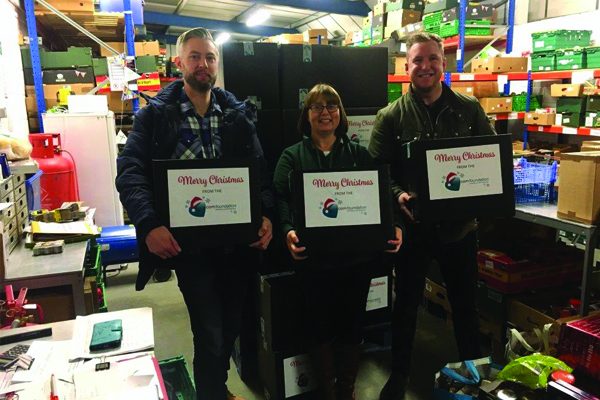 As in 2016, 4Com are once again acting as a key partner in the Amelia’s Rainbow Christmas Toy Appeal; serving as a toy collection point, as well as sorting, wrapping and helping to distribute the toys over the Christmas period.

Natalie Newman at Amelia’s Rainbow added, “Amelia’s Rainbow supports families across Dorset whose children are suffering with any serious, chronic, life-limiting and terminal illnesses. 4Com’s incredible involvement helps us reach a greater number of families than would otherwise be possible and as always, we really are extremely grateful for their help.”

The Foundation’s activities are made possible by 4Com’s team and this year has seen another excellent turnout, with staff from across the business getting involved. Dean Cartledge, Head of the 4Com Foundation explained, “Helping our community is a key part of who we are as a company, so it’s important to offer the entire team a chance to get involved. Once again, we’ve seen a great response, particularly for the toy wrapping, where we saw roughly 30 people staying late to make sure all the toys were ready for delivery.”

A ‘New Start’ provided to many by Ashley’s Birthday Bank