The 4Com Foundation had another incredible year in 2017, helping to make a difference to a number of charities both locally and nationwide. As the first Foundation event of this year approaches, lets take a look at some of the events of last year and the charities the 4Com Foundation helped support in 2017.

Ashley’s Birthday Bank are a charity whose work is based in the Bournemouth, Poole and Christchurch area. They work entirely voluntarily, and provide services to families who find themselves going through a financially difficult time, or to those who have escaped domestic violence, neglect or human trafficking. Their “New Start” project aims to provide families with household items after they have been re-housed so they can start their new life with essential items they themselves would not be able to afford.

To raise money, nearly 70 members of staff took on the Isle of Wight Challenge in July, completing a circuit of the island by running 13.2 miles, cycling 31 miles and walking 22 miles within 15 hours. Through sponsorship, these efforts helped to raise £40,000 for Ashley’s Birthday Bank, which has enabled the charity to action their “New Start” project. By the end of 2017 the charity provided new start packages, which includes household items such as mattresses, cookers and fridge freezers, to many families who have sadly been re-housed. With the support that this package gives, these families can start to turn their new property into a home and, thanks to 4Com’s funding, Ashley’s Birthday Bank will be able to continue doing this for more families long in the future.

While the 4Com Foundation only holds one big fundraising event each year, it also arranges many other activities to raise money for charities. Each month a dress down day is held within the business, with a different nominated charity receiving the donations. In 2017 we donated nearly £4500 to different charities from the donations received on these dress down days. Some of the charities benefitting from this included Alzheimer’s Society, Sparks Charity, Autism Wessex, Balls to Cancer, Teenage Cancer Trust, MS Society, Royal British Legion and The Harley Jae Trust.

The 4Com Foundation always likes to get involved with national charity events throughout the year too. In March the Foundation supported Comic Relief’s Red Nose Day, raising £723.36 in donations with the business holding a red dress down day, a bake sale and sponsoring others to do something funny for money. The Foundation supported the World’s Biggest Coffee Morning in September by holding The Great 4Com Bake Off. This cake sale, partnered with a dress down day, helped to raise £1037 for Macmillan Cancer Support. Most recently, a Charity Christmas Day was held at 4Com to raise money for Save the Children on their national Christmas Jumper Day. Staff donated to wear a Christmas jumper as well as donating to play along with some festive games, managing to raise £897.38 for the charity.

The 4Com Foundation also helps to make a difference in the community by volunteering with local charities. In 2017 we held two community lunches, providing fish and chips, bingo and musical entertainment for guests from Christchurch Angels. This is always an enjoyable event and helps to provide those attending the opportunity to get out of the house for an afternoon, to meet others and to have some fun.

As in previous years, the Foundation once again partnered with a variety of charities during the month of December to help make a difference during the Christmas period. Working as a key partner for the second-year running with Amelia’s Rainbow for their Christmas Toy Appeal, 4Com was an official toy collection point, while members of staff also helped to sort and wrap presents that were donated, and distribute them over the Christmas week to the deserving families. Staff members also donated items for food parcels that were being distributed between Bournemouth Foodbank, Christchurch Angels and The Trussell Trust Salisbury. In total a record-number of 200 parcels were wrapped and packed for the three charities, with staff having taken time out of their lunch-breaks and staying after work to help support. 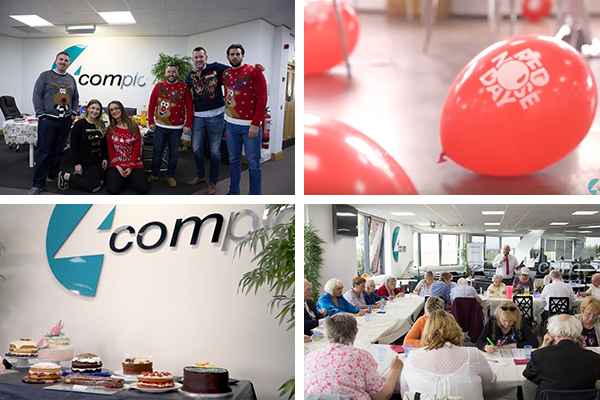 The 4Com Foundation, now entering its 5th year, is gearing up for another successful year of fundraising. At the end of this month, 4Com will be holding the first of this year’s events and will be welcoming back members of Christchurch Angels for another of our community lunches.

This site uses cookies. We use these cookies for such purposes as analytics and site functionality. By continuing to browse this site you are agreeing to our use of cookies.OK